Get Social With Us

The two works by local composer Warren Bessey will be performed under the baton of  conductor, Russell Guy Scott, by the full KZN Youth Wind Band, a 40-member choir made up of The Clermont Community Choir and the Voices of Angels Children’s Choir, members of the St. John’s Diocesan School for Girls Marimba Band together with five vocal soloists: Nonzwakazi, Nana Mkhize, Andile Dlamini, Nozuko Teto, and Smanga Cebekhulu, a string quartet from the KZN Philharmonic, and His Majesty’s Praise Singer, the prolific historian and poet, BM Mdletshe.

In support of this event, ticket-holders stand a chance of winning a four-night cruise holiday on the MSC Orchestra visiting the Pomene in Mozambique for two adults, valued at R 18 000.

Patrons of the arts will be encouraged to purchase a concert ticket and thereby “play their part” in support of the music development of our youth, with the KZNYWB donating all revenue raised from ticket sales to the KZNYWB Development Trust.  “We all sense the urgency and believe through concerts like this one, we can raise much needed funds for the provision of music training for young and deserving yet disadvantaged players”, said composer Warren Bessey. 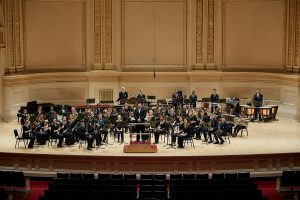 “The KZN Youth Wind Band has been in existence for over 40 years, and provides a platform for youth from all socio-economic, cultural backgrounds to come together and perform at the highest standard.  The KZNYWB is truly representative of South Africa in breaking down barriers through music. Just one look at the band and it is clear to see there are no divisions or tensions, simply a love of music across all races, cultures, economic brackets and ages,” said an enthused Kim Matthews of the KZN Youth Wind Band. 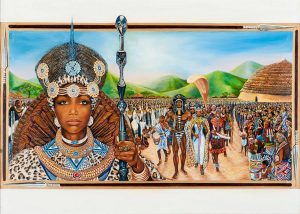 “Inkosazane Mkabayi” honours the tenacious statesman and strategist, Princess Mkabayi kaJama.  A 30-minute work which focuses on one of the  most powerful figures in 19th Century Zulu history, “Inkosazane Mkabayi”    pays tribute to King Shaka’s formidable aunt who is remembered as a highly intelligent leader and fierce defender of the Royal Household.

This collaborative musical event has been a labour of love for Bessey who is driven by the power of music to create bridges across which all South Africans can walk together.

“The Royal family are the custodian of our arts, so it is with all due respect, humility, honour and grace, I am delighted to be re-telling the story of their history through music. I have long been fascinated and intrigued by the amazing tenacity, strength, resilience and vision of both Queen Nandi and Princess Mkabayi. They were astonishing women. Their respective stories, in all their humanness, inspired this music,” explained Bessey. 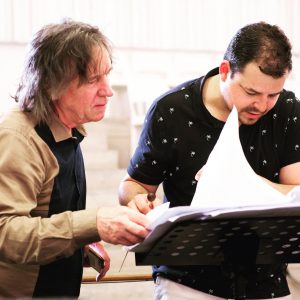 He sings the praises of the professionalism, enthusiasm and commitment of the musicians of the KZNYWB who will be performing the two pieces, and he is equally honoured to work with KZNYWB’s conductor Russell Guy Scott and choir master Msizi Mnyandu.

Music lovers from all traditions are encouraged to come and experience an afternoon of glorious music as we ‘play our part’ in support of our artistic youth.